WHAT IS PESSO BOYDEN SYSTEM OF PSYCHOMOTOR?
A client who attended a day of PBSP client sessions said: I felt as if I had found a space where magic happens, and lives are transformed, and a peace beyond words begins to unfold.

PBSP is the most powerful system I have come across. It seems to work on, and resolve, issues that other methods – that are based around one to one talking – do not seem to touch. I have seen people make paradigm shifts around limiting beliefs, change their sense of themselves, gain huge realisations, or simply explore an issue to gain greater understanding. The thing is that it seems to get to bits of the issue that other methods do not reach, and that allows people to change.

PBSP is about attunement, about sensitivity to what is going on in your own body and in the interaction with others. In normal life we don’t usually listen to our bodies at all. But in normal life we continue to screw up!!! So in PBSP we pay attention to posture, breath, how it feels when someone is close to us, or looks at us in a particular way. 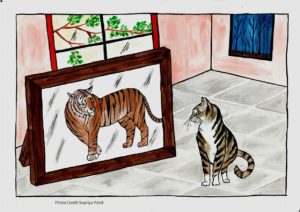 In PBSP we track these things, and often, as a result of paying attention, we become aware of something from our own history. For example ‘when he looks at me like that it reminds me of my first boss who was always angry’, or ‘when people get too close to me on the tube it reminds me of being shut in a cupboard as a child’, or ‘being a group like this reminds me of being at school and being ashamed to say ‘I don’t understand”. What we think about things is different from what our body tells us, and so in PBSP we pay attention to what is happening in the body, and the dissonance between the body, and what someone says. For example some one might say ‘let me tell you about my mum she was a wonderful person’ and their face is completely rigid as they say it.

A structure starts from a problem – the client starts to talk about something in their life that is not going well, or a belief that is holding them back ‘I can’t ……..’. As a client that is all the preparation that is needed. Group members will then be asked to play ‘roles’. The role players do not improvise, the client tells them exactly what is needed, and the facilitator manages the whole process. This enables the clients’ inner world to be externalised. In creating this ‘true scene’ we may have a supporting figure to be with the client, and we may have someone playing a negative voice. We then look at any resonances this scene may have with the client’s past, and explore what may have happened in the past to make this a sensitive issue. The next stage is to create an ‘antidote’. This means creating a ‘new memory’ that can sit along the old, real memory. The new memory is designed to give the client precisely what they needed in the situation. The role players are asked to do, and say, the very things that would have helped. Thus the healing happens at a literal and a symbolic level, and the client can internalise the new experience.

Structures last 50-60 minutes, and we allow a few minutes for people in the group to acknowledge the parts of the structure that touched them, resonated with them or reminded them of their own issues. So each session takes just over an hour. Sessions are very much led by the client, and overseen by the facilitator, and the system is very respectful of the client.

During a Pesso Boyden day, we will normally run four structures. People volunteer for these, and if more than four people want to have a go at being ‘the client’, then we pick the names from a hat. Even though only four people are ‘the client’, everybody benefits during the day. I have had participants tell me that they have made deep personal learnings, or moved an issue forward even though they have not actually done any explicit personal work

Sign up here for info about workshops and newsletters

Juliet Grayson talks about the modular CPD: Certificate in Working With Couples – for therapists who usually work one-to-one

Landscapes of the Heart: The working world of a sex and relationship therapist. By Juliet Grayson.

You are in the right place for